The Cat we all greet as he walks down the street

In his coat of fastidious black:

No commonplace mousers have such well-cut trousers

Or such an impeccable back.

Bustopher Jones: The Cat about Town

The Theatre's certainly not what it was

Then, if someone will give him a toothful of gin,

He will tell how he once played a part in East Lynne.

At a Shakespeare performance he once walked on pat,

When some actor suggested the need for a cat.

He once played a Tiger - could do it again -

Which an Indian Colonel pursued down a drain,

Produce blood-curdling noises to bring on the Ghost.

And he once crossed the stage on a telegraph wire,

To rescue a child when a house was on fire.

And he says: "Now, these kittens, they do not get trained

As we did in the days when Victoria reigned.

They never get drilled in a regular troupe,

And they think they are smart, just to jump through a hoop."

And he'll say, as he scratches himself with his claws,

"Well, the Theatre's certainly not what it was.

These modern productions are all very well,

But there's nothing to equal, from what I hear tell,

That moment of mistery

When I made history

As Firefrorefiddle, the Fiend of the Fell."

A voice that would soften the hardest of hearts

I'd a voice that would soften the hardest of hearts,

Whether I took the lead, or in character parts.

With an hour of rehearsal, I never could fail

"I have played", so he says, "every possible part,

And I used to know seventy speeches by heart.

I'd extemporize back-chat, I knew how to gag,

And I knew how to let the cat out of the bag.

I knew how to act with my back and my tail;

With an hour of rehearsal, I never could fail".

The Gallery once gave him seven cat-calls

And he likes to relate his success on the Halls,

Where the Gallery once gave him seven cat-calls.

The Cat at the Theatre Door

Gus is the Cat at the Theatre Door.

His name, as I ought to have told you before,

Is really Asparagus. That's such a fuss

To pronounce, that we usually call him just Gus.

A Cat so clever as Magical Mr. Mistoffelees 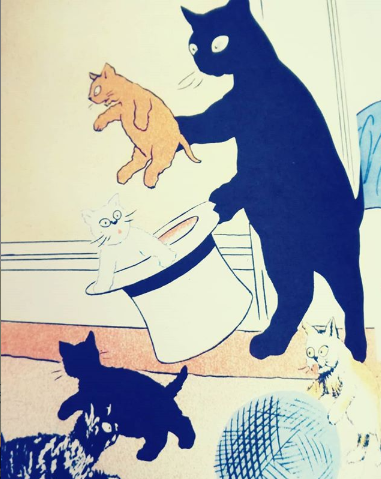 And we all said: OH!

Know a Cat so clever